Unity is a better engine for experienced game developers due to its larger array of features, while Godot is better for beginners due to it being a lot more lightweight and intuitive. Godot is completely free and open source. Unity is neither. 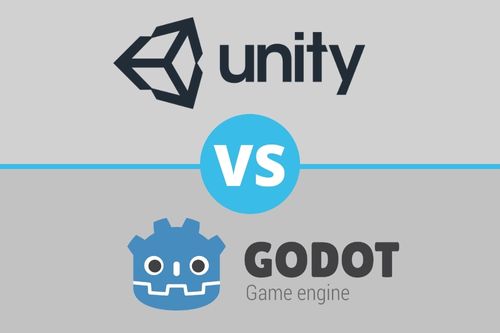 There are a lot of ways to compare the two engines, and even within these individual metrics, it can be subjective which is better. In the rest of the article, we are going to look a bit deeper at Unity vs Godot to determine which engine is right for you.

Unity has been a steady fixture in the game engine world since 2005 and has built up a strong reputation in that time. Godot is a much newer and younger engine, but it also does many things differently rather than just attempting to be a clone of Unity.

So which game engine is better?

It depends on your circumstances, what you plan to use the engine for, and how you plan to use it. The table below gives you a quick breakdown of some of the core concerns before we go into them in much finer detail.

Is Unity or Godot Easier to Use?

Whether you find Godot or Unity easier to use will depend on your level of experience in game development.

Most people find Godot to be more intuitive. This makes it very open to beginners who do not necessarily know what to expect and maybe jump into it for the first time.

Godot is also much more lightweight, making the download, installation, and set-up much simpler.

If you already have some experience in game development, you might find it easier to use Unity due to its broader range of features. You would be less likely to be fazed by the interface and will be able to perform more advanced tasks easier than if you had to do them from scratch in Godot.

Does Unity or Godot Give You More Control?

This is another answer that depends on how you plan to exercise the control, with Godot offering more control to coders and Unity to experienced game developers.

Godot is open source. This means that if you find yourself trying to do something that the engine does not support, you can go into the code to change the engine itself.

This is probably the greatest amount of control an engine can give you, but whether you are able to make use of it will depend on how good you are at programming.

Unity is not open source, so you will not be able to make such foundational changes. You can exercise quite a lot of control over Unity, however, through the use of its many, many resources.

Does Unity or Godot Have More Resources?

Unity is an older engine than Godot, and it has a lot more resources available to it because of that.

Unity comes with a lot more features and tools, including both the ones integrated into the engine itself and ones that have been created by third parties and are available to download. Although not all resources like this will be free, having the option can save a lot of time and energy.

Unity also has a lot more learning resources available for it. There are plenty of tutorials for how to perform specific tasks in Unity through blogs, YouTube videos, and even training courses. While Godot has tutorials around for it too, they are far fewer in number.

Is Unity or Godot Better for 2D Games?

Godot comes with separate 2D and 3D engines, giving it an advantage in creating 2D games compared to Unity, which uses a single engine for both.

Creating 2D games in Godot is a much faster and simpler process because of this dedicated 2D engine, although some users may find that the performance in Godot is a bit poorer.

Unity renders its 2D games in what is effectively a 3D engine. This is not really ideal, but it is functional, and some game developers find it preferable due to the better-looking graphics.

Is Unity or Godot Better for 3D Games?

Game developers pretty much unanimously agree that Unity is better for complex 3D games than Godot.

Godot does have a dedicated 3D engine, but it is not able to render graphics as well as Unity, and the difference is very easy to notice. If you are making a game with simpler 3D graphics, however, you would not be losing out on much if you make it in Godot, assuming you find the engine’s other features preferable.

At the time of writing, Godot 4 is in development, and it will be bringing with it significant advancements in 3D rendering. Upon release, it may be a suitable competitor to Unity for developing more advanced 3D games.

Is Unity or Godot More Affordable?

Godot is open source and therefore completely free, unlike Unity.

Unity does have a free version – the Personal account – that hobbyists and starting game developers can work with. Over the past years, the engine has been making more and more of its features available for Personal accounts, and at the moment almost all of these core features are accessible to non-paying users.

Unity Personal accounts cannot, however, be used for developers making more than $100,000 per year in revenue. Personal accounts are also not able to remove the Unity-branded splash screen from the start of the game.

Neither engine, not even the Personal version of Unity, requires developers to pay them royalties on games made with them.

There may not be one objective answer to the Unity vs Godot debate, but in this article, you have learned what makes them different and are now able to decide which one is more suitable for your needs.