A video game producer works closely alongside the executive team(stakeholders) and their own production team to develop and execute the overall vision for the project.

They are responsible for the financial aspect of the project, monitoring the budget, managing costs, facilitating the job of every person on the team, making sure there are no risks facing the project and most importantly finishing the Game on time and on budget. 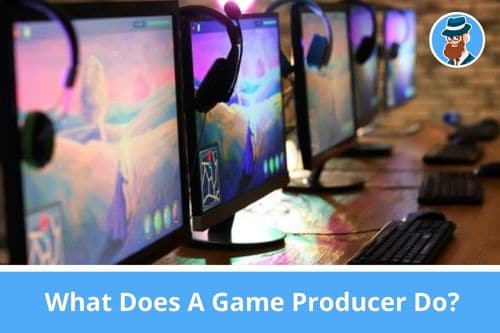 Here are some Game producer responsibilities:

How Can You Become a Video Game Producer

Video game production requires many skills, such as programming, graphics, animation, music composition, voice acting, writing, marketing, and distribution you don’t have to be an expert in all of these that’s for sure, but what you need to know is how they work and how can you facilitate their process.

The following are some tips for aspiring video game producers:

Learn About Different Types of Games

Strategy games require players to develop strategies to overcome obstacles and defeat opponents, RPG you have a huge world to discover with dungeons, MOBA which is a multiplayer Online Battle Arena like League of Legends, or Dota 2 where you as a player have to destroy the other player with the help of computer-controlled minions.

Other types of games are MMO RPG, Shooter Games, and of course Casual and hyper-casual games which have been booming in the past couple of years.

Forget About Degrees in Computer Science

To work in the gaming industry, you must have knowledge of game production and software depending on which department you want to join. You could earn a bachelor’s degree in computer science, computer engineering, Concept Art, or another relevant field.

Nowadays degrees don’t say a lot actually throughout my 14 years of experience no studio has asked for my master’s degree, it is all about skills and experience and being able to deliver results.

What Education do I need to get a job in video Game Production?

Video game development is one of the fastest-growing industries in the world today. With big companies like EA, Ubisoft, Blizzard, Bandai, and many more hiring hundreds of people every month, it seems there is no shortage of jobs.

But of course, that has another negative side to it, with this industry projects close and open very frequent layoffs happen as well but how does someone become qualified to work in the gaming industry?

And what about the experience? In this article, we’ll take a look at some of the different options available to aspiring developers.

Before jumping into the specifics, let’s start off with some basic information. First, what exactly makes up a video game?

A video game is basically just a computer program that allows players to interact with the program via a screen. This could include anything from playing chess against a friend over Skype to controlling a spaceship in space to racing cars around a track.

In most cases, this program is developed by teams of programmers, artists, designers, musicians, writers, producers, QA, audios, and more. These individuals often collaborate together to make sure everything works properly, and that each aspect of the game plays well.

They’re responsible for creating the entire game, including the art assets, music, level design, and gameplay mechanics, and how they collaborate together and how the whole production work and actually delivers a final game is what the Producer does.

Some of these roles overlap, such as a programmer might also be working on the audio side of the game, while another person might be designing the levels.

What are the Different Types of Producers?

Producers work closely with their teams to make sure games meet their deadlines and stay on schedule. Producers oversee many aspects of the game, including managing schedules, budgets, and resources.

External producer: someone who helps the publisher manage the entire development cycle. External producers typically work with publishers to hire freelance programmers, artists, writers, and testers, and sometimes they are working remotely.

Internal producer: someone who manages the development team. Internal producers work closely with developers to ensure that everything runs smoothly they are usually present within the studio and work on solely 1 game production.

Associate producers: are specialists who focus on specific tasks such as programming, art, design, writing, and testing they work alongside senior producers helping them with part of their daily load.

Senior producers: they usually are overseeing several game production at the same time, senior producers have more experience and should have several titles under their belts.

Who does a games producer work with?

A game producer works closely with the rest of the development team during the creation process, at the same time they are constantly working with the management you can visualize them as the link between stakeholders and the production team feeding information for both sides and making sure everything is running smoothly.

They are typically involved with the creative side, like storyboarding, character design, and level design. Game producers are usually responsible for managing all aspects of production — ensuring deadlines are met and budget constraints are adhered to.

How to get a job as a game producer

The best way to break into the industry is to become a game producer yourself. If you already have experience producing games, you might be able to secure a position as an assistant producer or an associate producer. This is a great way to learn about the process without having to worry about deadlines and budgets.

If you don’t know where to begin, there are several resources available to help you find a job as a game developer. You can check out Artstation, which lists openings for game studios. You can also look at sites such as Gamasutra, which offers advice on how to build a portfolio and network with potential employers.

There are plenty of opportunities in the indie scene, too. Many developers are looking for freelance assistance. You can contact them directly via social media or email, or you can post a request on sites like Freelancer and Upwork.

You can also try contacting smaller studios. These companies often hire interns or assistants to assist with projects. Some even offer paid positions.

One great piece of advice I can give you is to get into the games industry whether its a designer, artist, or programmer role because this is where you start to see how game production work.

You will probably have a producer in your team, watch them carefully and see what they do on a daily basis, and offer them help when it’s possible. All of this experience will add up once you decide you are ready to apply for a Producer job.

Where To Find Game Producer Jobs

If you want to become a game producer, there are many ways to do it. Some people start out interning at different studios, while others go straight into full-time employment. If you choose to pursue a career in video game production, here are some tips to keep in mind:

1. Get Your Hands Dirty

One of the best ways to gain experience is to apply for an internship. These positions allow you to shadow someone who works in the field, giving you hands-on experience. This could mean anything from testing out a prototype to helping with marketing materials.

As mentioned earlier, a producer has to know a bit of everything, so if you do have the luxury of time take small courses in c# for example as it’s used mostly in Unity or Learn how to use Autodesk Maya or even Blender ( as the gaming industry to shifting into using Blender more and more).

You can even learn how to use JIRA or Confluence, as a producer you will spend a big chunk of your day in these.

3. Network With Other People In The Industry

There are several online communities where you can connect with other professionals in the game development world. For example, GameJobsOnline.com allows you to find openings within the industry, while Gamasutra.com offers news and information about the gaming industry. Both sites offer opportunities for networking and building relationships.

But nothing beats making great connections within each studio you work in and connecting with you colleagues on Linkedin which you can grow slowly and before you know it you would thousands of people that would recommend you for jobs and even chat with you if they see anything fit for you.

A game producer has a lot of responsibility. They need to make sure that all aspects of a project run smoothly. A good producer should be able to communicate effectively with everyone involved in the project.

If you are a person that wants a bigger overview of how the game works, if you are a person who likes to see others succeed and enjoy communicating with people on a daily basis then you probably have some skills already innate that would help you in your first producer job.

It’s not easy to succeed in this position, but if you put in the effort, you will eventually reach your goal.

Zbrush vs Maya: Which is Better?

What Does A 3D Artist Do?