First, we want to define what retopology really is, so we say RE means that we intend to create a new topology for an already existing topology and that is what is exactly done.

Retopology is the process In which an artist recreates a new topology on top of an existing topology for many reasons that we will discuss later. 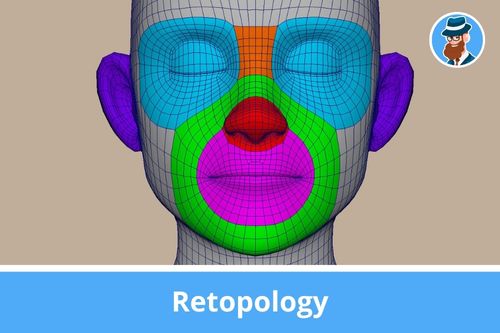 okay, this leads us to another question what is topology then?

Topology in the 3D world is the actual wireframe of a 3d object meaning its what makes a mesh, this starts from a vertex to an edge to a face and a face could be a triangle a quad, or an n-gon ( a polygon with more than 4 sides ).

3D topology is very important as it’s what gets animated, what gets textured, and what gets rendered. When I was starting out in the 3D world I used to print out 3D head wireframes and try to paint over them to understand how a mesh is formed.

This helped me identify certain patterns between all the topologies I found which helped me a lot later to create my own 3D topologies.

Why do we do Retopology?

If we already have a topology, why we do rebuild another topology on top of that? seems like a waste of time and energy to me. but of course, there are many valid reasons why we do it, let’s go over some of the:

with the popularity of 3D sculpting softwares the retopology process started to gain more attention as the need to recreate a new clean low rez topology is needed after the high-resolution sculpt is made.

the process goes like this, a 3D artist sculpts an asset in Zbrush and has all the artistic freedom he wants, never worries about polycount or anything. After this stage is over the result would be a high-resolution sculpt of the asset.

The sculpted asset could range from 500k polygons to 50 million polygons as your guessing that’s a huge number taking this asset and animating it or doing UVs on it is almost impossible, and here is where Retopology comes to the rescue.

Artists take the high-resolution assets and lay out a new cleaner and lowe resolution topology on top of it, covering most of the volume and shapes needed to cover the original sculpt.

In the end, a process called Baking which is created maps from the high-resolution sculpt onto the low-resolution model so we can retain all the details in form of a displacement map or a normal map.

Sometimes Retopology is done on old assets that need a new pass in order to bring them up to new animation standards that are set and created by the rigging or animation team.

As assets are made to be incorporated in 3D animations or in-game engine certain technical requirements needs to be met, ranging from polycount to the number of loops on joints, etc…

In certain situations, the model you have would be very far from the goal that is set by the tech team, and the only direction to go is to do a full retopology and correct all the problems the old mesh had.

LODs are level-of-detail meshes, these are commonly used in a gaming studio to create several versions of the same mesh each version has a specific poly count. Usually 3 LODs of each asset is created ranging from high, mid, and low resolution and this would be used depending on the level of zoom the assets would appear in.

For example on a map view it’s not logical to use a 3k character it would be smarter and much more convenient for the players if you use a 1k or even lower character as not much would appear of the asset, this will make the game perform better.

Doing Head Retopology is probably the hardest part because there are so many elements consisting of a head (eyes, mouth, nose, and ears) and most of these elements are moving elements certain loops need to be created to have a smooth and realistic-looking animation later on.

Throughout my experience and after doing Retopo for lots and lots of heads and faces I started picking up on a pattern with all the wireframes I was creating, certain elements now seem to be repetitive and end up in the same place this is why I laid all the wireframes I have done next to each other and started studying similarities between them.

I noticed 2 elements that are very important in each Face retopology I have done and these 2 elements are:

These 2 elements seem to redirect the flow of loops and polygons around them and these elements are the hardest to create and pinpoint when starting out the retopology process.

Without knowing each time I did a head retopology I was creating these 2 elements and struggling to find them as I go through the same process. Until I decided to reverse the retopology starting from these 2 elements right from the beginning putting them down and building everything else from those starting points.

Please feel free to use this Retopology Map as you please, I always have it open whenever I want to do a head retopology from scratch as it helps skip those annoying moments. Also below is a tutorial demonstrating this exact technique using Topogun,

Retopology is a main pillar process in creating 3D assets nowadays and it is an essential skill that every 3D artist should know and be familiar with.

Sometimes it’s a bit tedious to do Retopology as it’s not the most creative process but I think that’s what makes it special as it acts like a break between all the creative work a 3D artist makes. Retopology is when a 3D artist can relax a bit and go into a more chill and relaxed process.

I hope I covered most issues and questions you had about retopology, if you ever have a question you can always contact me.